skip to main | skip to sidebar

Ron Tomlinson: The Language of Abstraction

(There is nothing quite like getting up close to one of these paintings.) 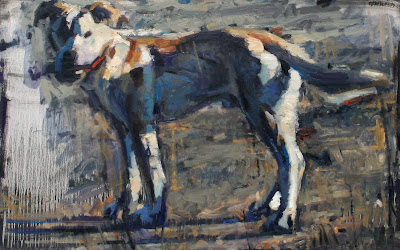 The work of Ron Tomlinson has come to San Diego, and we could not be more excited to host him and his paintings at The Andrews Gallery beginning the first week of August.

Do not miss the opening reception at the gallery on Saturday August 8, 2009 7 PM.

We will also present a showcase of Tomlinson's works at Brushworks Studio, located in the Arts Complex at 2400 Kettner Street in Little Italy, just north of downtown San Diego. This event will take place on Thursday August 6, 2009 at 7 PM. 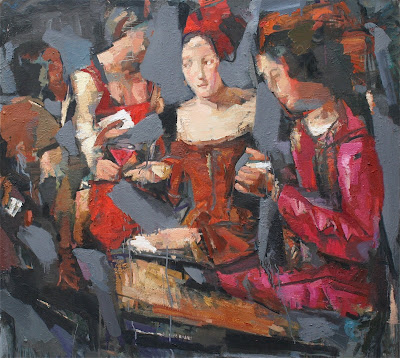 Ron Tomlinson was born in Boston, Massachusetts in 1945. He holds a Masters of Fine Arts from City University of New York, Brooklyn College, where he studied under the tutelage of Philip Pearlstein. He holds a Bachelor of Fine Arts from Boston University, majoring in painting as well as minoring in sculpture and psychology. He attended the Skowhegan School of Painting and Sculpture, where he studied also with Philip Pearlstein, as well as other illustrious figures such as Alex Katz, Ben Shahn, and John Cage. He has lectured on his work at various museums and universities, and was a professor of painting, sculpture, and film aesthetics at Texas Wesleyan University. His work is held in both public and private collections throughout the United States and abroad. Tomlinson currently lives and works in Forth Worth, Texas. 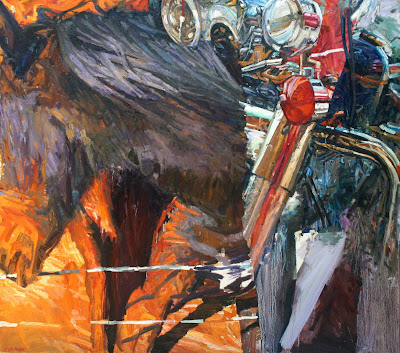 We have also published a beautiful catalogue of Tomlinson's work, subtitled The Language of Abstraction, which you can browse and purchase online here. 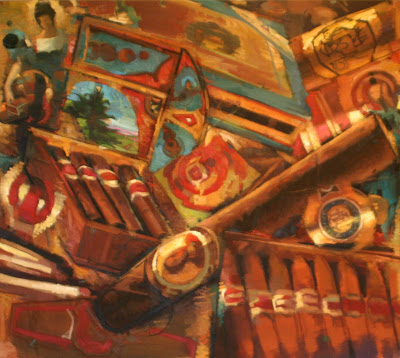 Here is a reproduction of the catalogue's forword:

They are perhaps not the most obvious things to put together, language and abstraction. After all, language is often construed as the most powerful means we have of lifting ourselves out of abstraction. It is the tool we use to represent, express, and clarify our experience. It is the shining star of our reason. However, the ruse is in the representation. If the function of language is to represent the things of our world, then our words must necessarily be distinct from that which they are meant to describe. Simply put, the word is not the thing; it is merely a description of the thing generated by our reason. In order for language to operate, words must obliterate the uniqueness of things for the sake of categories. In other words, our ability to clarify the world depends upon our ability to abstract it. Ron Tomlinson understands this principle, and deploys it throughout his paintings in an earnest mission to understand the nature of both art and human experience.

Tomlinson’s paintings are neither abstract nor realistic; instead they straddle the two realms. Thanks to his immense technical skill, validated, for example, through his decade-long series of chair paintings, his works all succeed in giving us glimpses of something “real”, be it a pan, a cigar, a motorcycle, or a human being. They all on some level speak the language of recognizable images. However, the means by which he attains such clarity is unequivocally abstract. This is seen through such trademark qualities as his vivid and painterly brushstrokes, his enthralling use of color, and his oft-fractured picture planes. The power of his perspective is rooted in his ability to embrace the true abstraction of our world, and in turn employ it towards a dependable representation of our experience. His vision can be categorically trusted because it is stylistically honest to the nature of art as the practice of putting forth images, i.e. things that, by being representations of real things, are necessarily other than those real things, and thus abstract. Tomlinson’s paintings never force reality upon the viewer. By embracing the abstraction of the world, Tomlinson’s work wears its falseness on its sleeve. In this way does his vision become incorruptible, as opposed to the so-called “real world”, which will always be saturated in doubt because it claims to be real. By representing the real world in its honest and abstract form, Tomlinson’s work offers us a world far more authentic than anything realism could ever offer, while simultaneously surpassing the visual capacity of purely abstract painting. Through Tomlinson’s vision, we are shown that faces are no longer made up universally applicable words stripped of any singularity (i.e., eyes, ears, cheeks, brows), but rather by an intricate combination of contrast, color, line, and form. Tomlinson trades in truth, not symbols. He does not overlook the fact that these physical components are the fundamental building blocks of our experience. These components are the language of abstraction, a language that Ron Tomlinson speaks with the utmost fluency.

Someone could, and I expect will in the future, devote volumes to the life and work of Ron Tomlinson. Just as the majesty of his visual representation breaths life into his paintings, so too has his own magnetic personality ignited wonderment and discovery in countless people throughout the five decades of his career. The well of information that springs from Tomlinson’s brush is deep, and will never run dry. It is in and of itself an inspiration, the consistency with which so many different people have been moved by him and his work, and yet in a way it surprises me little, for the vigor of Tomlinson’s honest and learned vision is there for you to share, for you to make your own. 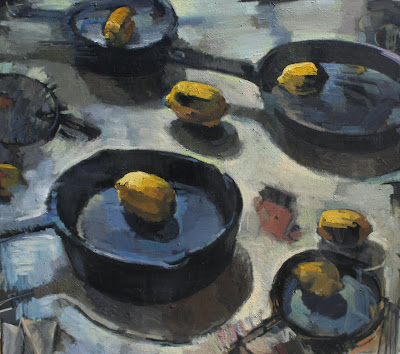 We are particularly excited that the artist will be joining us both for the opening reception and the downtown showcase. Do not miss the opportunity to view these works and meet this living master. We look forward to seeing you. 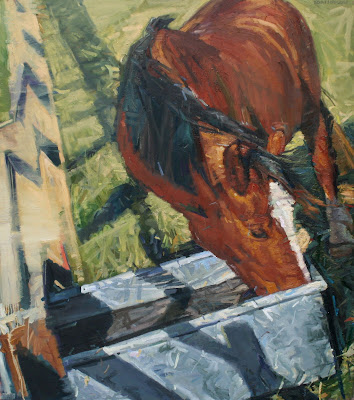 Posted by The Andrews Gallery at 2:50 PM

The Andrews Gallery
San Diego, California
The Andrews Gallery Blog covers news and events from the gallery as well as other things of note from around the world. Well, mostly in Southern California and relating to the Arts. Visit the gallery's official website @ theandrewsgallery.com to learn more about us. There you can also sign up for the gallery's newsletter that will keep you up-to-date on all of our exhibits, performances, and fiestas. Thanks for the visit. Feedback appreciated.